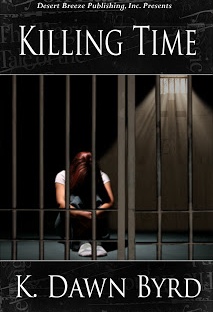 I want to thank K. Dawn Byrd for so generously agreeing to answer my nosey questions and for allowing us a peek into her upcoming novel,

~ KILLING TIME ~
K. Dawn, I would like, as would the readers, to know more about you, the woman, the writer, and the story you have to share.


Are you single or married?
I’m married and have been for 15 years. Our first date was to church on a Wednesday night. We’re best friends and have been pretty much inseparable ever since.

Do you have children?
I have a wonderful step-daughter, Brittany. She’s my pride and joy and even though she’s not mine biologically, she’s mine in my heart. She’s grown into a beautiful, strong Christian woman who I’m proud to call my own.

When did you begin to write?
I began writing about three years ago. I love a challenge and found learning the craft and seeking publication to be a worth while one. I still buy every book I can find on writing. If I can learn one thing to make my writing stronger, it is worth the purchase.

What brought you to ACFW?
I’d already decided that I wanted to write Christian fiction and when I found ACFW, it was a dream come true. I’m amazed at the amount of talent in that organization. The members are absolutely wonderful and so helpful. It’s awesome when well-known authors take the time to answer the questions of a newbie.

How long ago was that?
I’ve been a member for two years.

When can we expect your novel, KILLING TIME, in the bookstores, K. Dawn?
KILLING TIME is my August 1st release.
Here’s the cover blurb:
Mindy McLaurin, thinks it’s the end of the world
when she’s incarcerated on trumped-up embezzlement
charges. While in jail, she investigates the death
of an inmate who allegedly died of an overdose.
Mindy suspects foul play when her cellmate
dies and she learns that both women had ingested
the same drug. Mindy trusts no one, including
Drew Stone, the handsome counselor she can’t
stop thinking about. She faces many challenges,
including constant interrogation by the Major
and emotional abuse from the other inmates.
Upon release, someone is stalking her and
framing her for the murder. Can she prove to
Counselor Stone that she’s innocent of all
charges before she loses him forever?

In which genre your newest novel?
KILLING TIME is a contemporary romantic suspense.

What is it about that particular genre that interests you the most?
I write what I love to read. Suspense is my favorite. Throw in a little romance and we have a deal! I especially love unpredictible books. Throw me a zinger! Because I love those books, that’s what I write. Readers should expect thte unexpected when they read my work.

About that sneak-peek of the content I mentioned to our readers?
Here’s the exerpt. You can also download he first few chapters for free upon release, August 1st at Amazon.com. If you dont have a KINDLE, you can learn how to download the free KINDLE app on my blog at;

Enjoy the following from ~KILLING TIME~
Mitch was waiting for her in the visitation area. Mr. Blair, his attorney, at his side. Delacy ushered her to a glass-front cubicle. Mindy longed to touch Mitch, to draw strength from someone stronger than herself, but the glass made this impossible.

Mr. Blair smiled and nodded toward the phone. Mindy picked it up, anxiety making her a little light headed. She shivered as the cold hard plastic of the receiver came into contact with her ear.

“Hello, Mindy,” the elderly attorney said. “It’s good to see you again. I wish it were under better circumstances.”

“I can’t represent you. I’m semi-retired and handle mostly real estate transactions. This is out of my league, so I’m going to call a good friend of mine, Bill Sands, and ask him to get in touch with you. He’s a good attorney.”

“Thank you.” Tears threatened to overflow.

“I need to ask you some questions though. Okay?”

“What led up to your arrest?”

“A few days ago, I realized that someone had gone through my desk at work. The signature stamp I use to endorse payroll checks was missing.”

Mr. Blair touched his mouth with the top of his pen. “Whose name was on the stamp?”

“My boss. His name is Mr. Warner. I kept a few personal items in my desk, like deposit slips for my own bank account. Someone used the stamp to endorse checks and then deposited them into my personal account.” Embezzlement. What an ugly word.

“Any idea who did this?”

“I believe it was my boss’ son, Rick. I’ve had a bad feeling about him from the time I met him. I don’t trust him. When he moved back from out west, Mr. Warner gave him an executive position in the company and check cashing privileges.”

“Why would he frame you?”

“He started writing big checks. Thousands of dollars. He was so afraid I’d tell on him that he threatened to have me fired.”

Mr. Blair scribbled furiously on a yellow legal pad. “What’d he need all that money for?”

“I heard a rumor that he has a gambling problem and owes a lot of money to dangerous people.”

“Anything else?” he asked.

“Do you have the money yet from selling Grandpa’s house and land?”

Mr. Blair had represented Mindy in the closing. She’d held back selling as long as she could, but the house was too large for her to maintain. The new roof and plumbing problems had almost drained her bank account.

“Hey, Baby,” he said in a voice as smooth as milk chocolate.

Mindy’s heart tugged when Mitch smiled. His good looks weren’t lost on her. He could turn on enough charisma and charm to benefit him in any situation. “Mindy, honey. I’m sorry that you’re in here, but I need your help. Do you remember the new case I told you about? The one where that young girl died of overdose.”

Mindy’s overloaded brain scrambled to keep up. She nodded.

Mitch ran his fingers through raven black hair. “Keep your eyes open, love. That client is paying me a lot of money for information about her daughter.”

“I’ll ask around when I go back to the pod. What time am I leaving?”

“Not today,” Mitch said. “I need you. I need that information.”

“You’re not getting me out of here?” Mindy’s voice rose to hysteria.

Mitch couldn’t have slapped her in the face and hurt her more. Reality washed over her in a chilling wave. She wasn’t going home. He was leaving her to work undercover.

Hot tears of anger blazed a trail down Mindy’s cheeks, but she didn’t care. “You’re not going to leave me here,” she spat, as if the demand itself had the power to force him to change his mind.

“Not for long, baby. You’ll be okay. You’re a strong woman. That’s one of the things I love about you.”

“Please don’t leave me here, Mitch.” Mindy’s voice trembled. “You don’t know what it’s like back there. Please take me home. I just found my sister.”

“Your sister? What are you talking about?”

“Remember? I told you I have a twin? I’ve got to get out of here so I can help her.” Mindy placed her hand on the glass, the tears on her palm smearing her reflection. “Please, Mitch.”

“It’s not for long, baby. You’ll be okay.” His expression faltered for an instant and she thought he was about to change his mind. Just as quickly, his eyes hardened. “I’ve got to go now, baby. Take care of yourself.”

Before Mindy had the chance to reply, Mitch replaced the receiver. She looked at Mr. Blair. Her face must have conveyed the terror and sense of abandonment she felt. His expression was one of sorrow and helplessness.

Mindy watched Mitch exit the room, his head high and step light. He never looked back.

K. Dawn, would you share your professional bio-sketch with our readers so they will have your contact information? 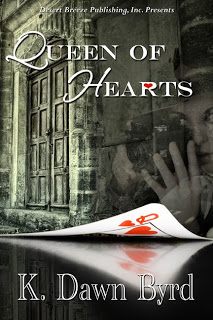 K. Dawn Byrd is an avid blogger and gives away several books per week on her blog at

http://www.kdawnbyrd.blogspot.com/,
most of which are signed by the authors.
She’s also the moderator of the popular facebook group, Christian Fiction Gathering.
When not reading or writing, K. Dawn Byrd enjoys spending time with her husband of 15 years,
walking their dogs beside a gorgeous lake near her home, and plotting the next story waiting to
be told.
Links:

Blog:
http://www.kdawnbyrd.blogspot.com/ Publisher:
http://stores.desertbreezepublishing.com/-strse-103/k-dawn-byrd-killing/Detail.bok (there will be links at this site to purchase from Amazon, Barnes and Noble, the Sony ebook store and others)

K. Dawn, is there anything I may have neglected to ask that you’d like readers to know?
Every week I interview three to five authors on my blog who give away a copy of their books to a lucky reader. Most of them signed by the authors. They can register at;

I want to express my appreciation to you for joining us this week, K. Dawn.

Thanks so much for hosting me on your blog, Joy!

You are very welcome, K. Dawn.

Be sure to read this e-suspense novel by writer, K. Dawn Byrd ~KILLING TIME~ to get the ‘rest-of-the-story’.

Until next time~ this is Joy Avery Melville, Joyfully thanking you, the reader and our guest, K. Dawn Byrd, for spending time with us today!