Hi everyone, my name is Mattie Welling.

I’ve been an orphan since I was eleven years old (I’m more than double that now—but we’ll let that be our little secret). For the first three years after our parents’ deaths, my brother Owlie and I lived on the streets of New York City. Then, a wonderful man named Charles Loring Brace took Owlie and me into The Children’s Aid Society. We lived out the rest of our childhoods there, and when Owlie turned eighteen, he went west to make his way in the world. He’s always promised to send for me when he had a place set up, so I’ve been waiting. And waiting. (It’s been years now…) When I aged out of the Children’s Aid Society, I stayed on with them as a worker, traveling with the Orphan Train program from time to time. Recently, I received a letter from a stranger, a doctor in Salinas, California, informing me that Owlie had died. Of course, I was heartbroken. My only family was gone. But the doctor sent along what Owlie had with him at his death—which included a deed to his California homestead. So after talking to Charles Loring Brace, we set up an Orphan Train going all the way to California, and here I am. At the end of the Orphan Train’s route, there were eight children who hadn’t been placed out, so since I have this wonderful home with lots of land to go to, I’m taking them with me. But we’ve run out of money to get that last short leg of the trip to Salinas, so we’ve stowed away in a boxcar. Hope no one notices!

I’m a Wells Fargo Special Agent, which means I get called in to investigate when a shipment entrusted to the company is stolen. In this case, I’m not on the trail in search of an outlaw. In fact, I’m acting as a guard for a sizeable shipment that’s going to Salinas—trying to prevent it from being stolen, instead of waiting to chase down the bad guys if and when it is. That was a fortuitous happenstance, for sure. You see, I got a cryptic letter from one Mr. Ben Figueroa—a stranger to me—asking me to come to Salinas and meet with him. I was going to ignore the summons since I don’t know the man, but curiosity got the better of me. When I heard of this shipment and the need for an extra guard, I volunteered. So here I sit on a southbound train, pondering what on earth Ben Figueroa might want, and trying to keep my mind focused on my job in the process.

We hope you’ll read the story to see how we meet and what happens next!

Leave us a comment, and our author will give away one copy of our story (or another of her titles) to one lucky winner (US only). 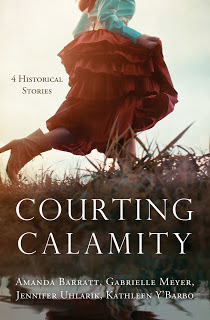 My Story Title:   Lady and the Tramps
From Courting Calamity Collection
My Story Genre: Western Romance

The Author of My Story:    Jennifer Uhlarik

Jennifer Uhlarik discovered the western genre as a pre-teen when she swiped the only “horse” book she found on her older brother’s bookshelf. A new love was born. Across the next ten years, she devoured Louis L’Amour westerns and fell in love with the genre. In college at the University of Tampa, she began penning her own story of the Old West. Armed with a B.A. in writing, she has finaled and won in numerous writing competitions, and been on the ECPA best-seller list several times. In addition to writing, she has held jobs as a private business owner, a schoolteacher, a marketing director, and her favorite—a full-time homemaker. Jennifer is active in American Christian Fiction Writers, Women Writing the West, and is a lifetime member of the Florida Writers Association. She lives near Tampa, Florida, with her husband, college-aged son, and four fur children.